I can think of few other games that are as exhilarating, fascinating, infuriating, and a whole host of other “ings” as Town of Salem. If you’ve ever played the popular card game Mafia, it’s basically that but online. If you haven’t, than a brief explanation is in order. Your average game of Town of Salem involves 15 players who are in turn split into 3 groups. These are the Townies, Mafia, and filthy Neutrals. The Townies want to kill the Mafia; the Mafia wants to kill the Townies, while the Neutrals might want to kill everyone, themselves, or even no one. You never know where you stand with filthy Neutrals. 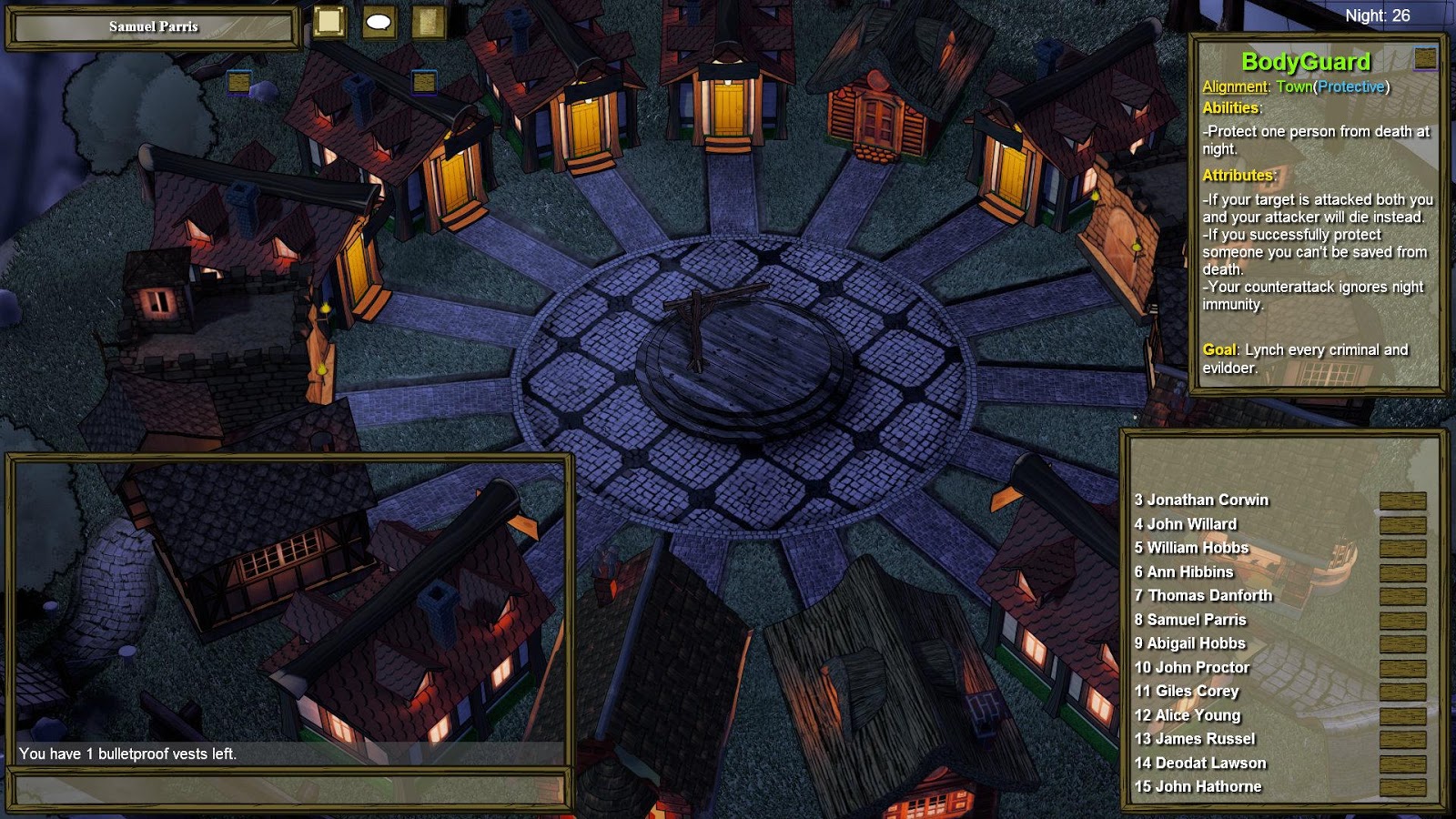 Every day starts with a “civil” discussion period where players can chat about anything. However, things get testy during the voting period where you may accuse somebody of being a killer. If others vote with you, the accused will take the stage and have a change to defend themselves.
From there the voting begins and based on the numbers the accused is let go or lynched. If set free the day continues, but if there’s a lynching the day ends leading to a nerve-racking night. During this period everyone becomes potential victims of the Mafia, vigilantes, as well a variety of vile Neutrals such as the werewolf, arsonist and serial killer. Then the whole thing can begin again though with a lot fewer people but potentially more evidence for the Townies.

You see the Townie’s have roles such as the sheriff, investigator, and spy whose job it is to gather information. Even if they’re killed they can leave this information in their will as a sort of “screw you” from beyond the grave. However, to counter this the Mafia has roles such as the forger who can modify your will and the terrifying janitor who can wipe away your will and any evidence of what role you were. The roles help give each individual player a character since they require them to play differently to win. The roles themselves (33 in total!) are varied and unique. Some protect, some kill, while some exist only to sow chaos. Since they are randomly assigned every time no one game plays exactly the same This leads to one of the games greatest strengths and weaknesses, the players.

You could have an efficient, smart, and experienced group of people who ensure your side a victory, or you could have the most imbecilic rabble of rubes whose very existence makes you want to step on a diseased-orphaned puppy that only wants your love. The pure unbridled hatred this game has inspired in me towards my fellow-man would make Gandhi shake his head in disappointment (after he got over his bewilderment in being alive and in the apartment of a man shouting at a glowing rectangle). On the other end of the spectrum, there’s the unparalleled joy and camaraderie one can feel with one’s fellow Townsfolk or Mafia over a job well done. As well as the unclean but oh so right thrill of outwitting everyone, or squeezing your way into the winning side as a nefarious Neutral.

But what’s it all for? Well, technically your reward is just clothes. When you win a game you get coins, which can buy your character different skins, houses, pets, or best of all death animations (dying in the shark tank is my favorite). The style is simple and cartoony while also being distinctive and appealing. Though honestly, you’ll be looking at the player’s name more than their avatars. Though perhaps the best part about this simple game I have sunk an unholy amount of hours into is that it is completely free. Just follow the link sign up and try a match or two. http://blankmediagames.com/TownOfSalem/ Though be warned each game lasts a minimum of around 20 minutes (15 if one group is really bad or really good).

Summary While potentially infuriating, Town of Salem’s number of roles, seemingly limitless variation, and variable of human ingenuity/stupidity ensures no game is exactly alike in this free addictive online adaption of the classics party game.

I am The Widow Maker