Playstation Plus Reviews for the Games of April

The first game of the month is a third person online shooter with a very unique aesthetic. Its entire world exists inside the mind of a bored highschooler doodling in class. Said doodles consists of violent, over the top monsters, weapons, and landscapes that look like they came from a kid who just watched his first R rated movie and is trying to make edgy shock art to stick it to the man. I mean all of this in the best way possible as the art and atmosphere is the best thing the game has going for it.

You can play as a cyborg vampire, ninja shark lady, and other assorted over the top characters. While each has their own distinct abilities such as the 90s punk rock reject making a fire tornado with his guitar or the masked serial killer turning invisible, they all play more or less the same. There is a component where some characters are stronger against other characters but that never really showed up in my play through to a significant degree. You have a vast array of weaponry that varies from standard machine guns, sniper rifles and shotguns to a more… exotic variety.

A coffin that fires the corpse of your overweight Uncle Joe, a SNES that fires explosive pixelated characters, and a monkey flinging his own feces and reloaded with bananas. These are just some of the weapons you can unlock and equip for hours of mayhem in the sparsely colored but well design levels. Unfortunately, due to the high health of everybody many of the weapons tend to feel underpowered which can make combat a chore. For a game that is all about combat that is a bit of a problem. And though the style is great, its writing and humor are a mixed bag.

During the fights an unseen announcer will go on various tangents and provide commentary on the battles. Though he had a tendency to repeat himself a bit too often the rants were still quite amusing, particularly the especially long-winded one on pay to win content. Unfortunately, most of the lines you’ll get is from your guide the dissected frog who will do nothing but criticize, insult and belittle you on absolutely everything. I will admit I got a chuckle out of him during a clever 4th wall breaking moment in the tutorial, but aside from that this character was more tedious and annoying then in any way amusing. Overall the game is worth a look for its characters and aesthetics, but unless you have a real itch for 3rd person online shooters there’s nothing much to keep you here for very long. 3/5

In this strange sci-fi ship simulator you and an AI companion (or up to 3 other players) navigate a series of vibrant 2D levels in your impractical but adorable spaceships to rescue magic space animals captured by the forces of evil. However, the trick is that each function of the ship can only be controlled by one person at a time. There are four stations for the main turrets, one for the giant rotating Yamato cannon, one for the shields, the map system, and the thruster. This requires coordination amongst the players in order to succeed at what would be basic in other games of this type. 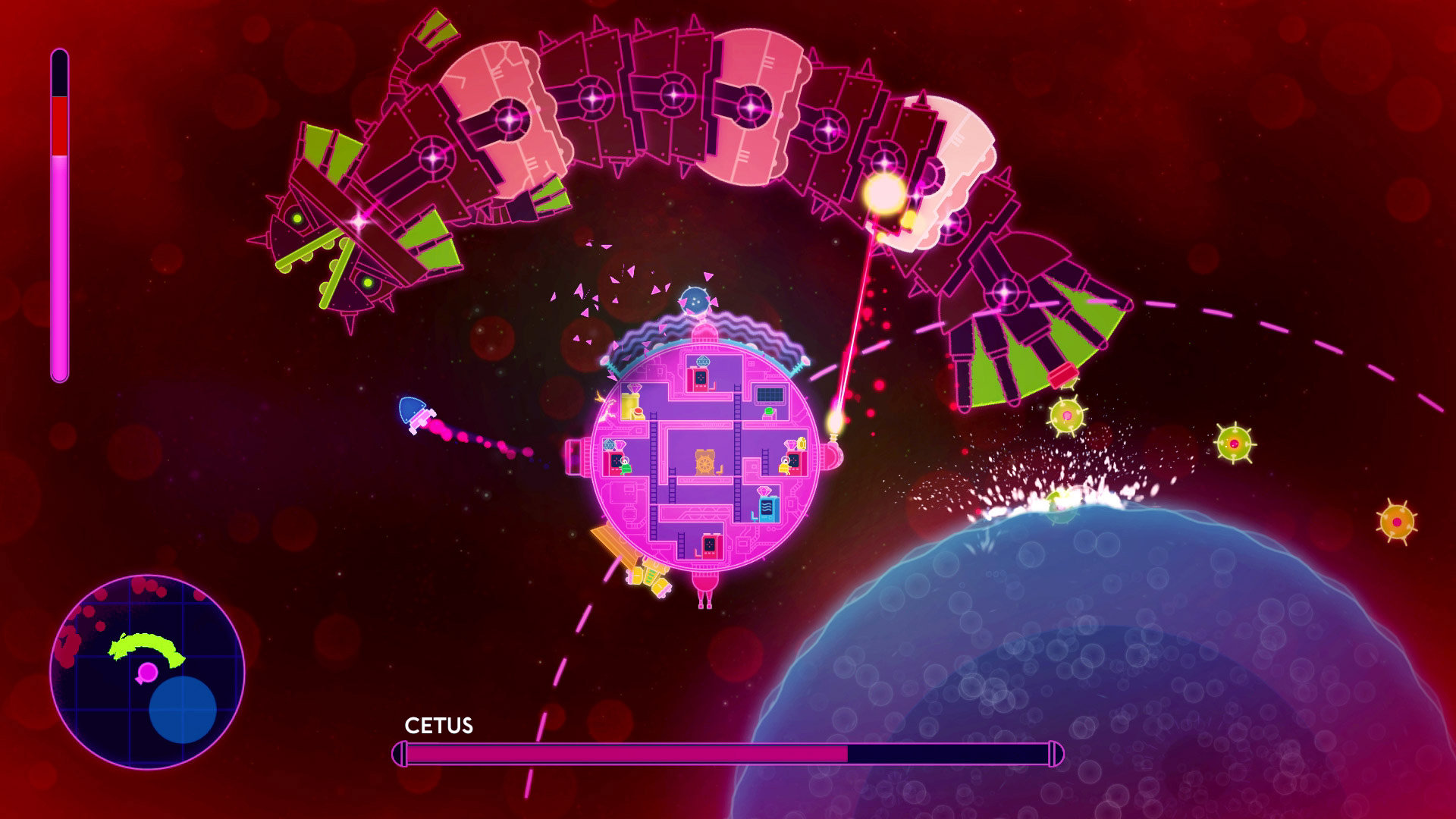 Further complicating matters is that the ship can obtain gift boxes with upgrades that can only be assigned to one console at a time. One could give your turrets more devastating firepower, but it could also add a reflection ability to your shields. These choices can lead to different ways of playing the game. Unfortunately while engaging with 4 players, if you have only yourself and the one AI companion things become significantly more difficult. In fairness the ally AI is well designed and you can order it to staff the stations. But since the game truly shines when four players are working in tangent it just isn’t much of a comparison. Again, I respect a game that wants to keep local co-op alive. But since organizing with four other people is difficult even amongst the best of friends the complete lack of online function in games like this continues to baffle me.

This game Is based on a series that was apparently some sort of Pokemon Go Prototype for the PSP. It was an augmented reality game were you captured strange creatures in the real world with the PSP’s camera attachment. Obviously that would be much more difficult to do with a PS3 so this iteration in the series is a 3rd person platformer with some light puzzle and combat elements. You play as a kid who is part of the organization that tracks the Invizimals and their dimension in a live action opening that looks like something out of a Nickelodeon Original movie. You enter the Invizimal’s dimension where something has gone horrible wrong. Fortunately by taming the Invizimals in a quick time event you gain the ability to take their form Ben 10 style. 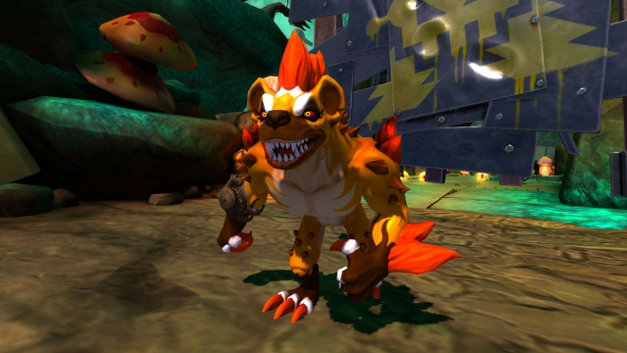 Each Invizimal has their own upgrade tree with special attacks they can unlock. And though they all control similarly, they have some abilities that can set them apart. The Ocelot creature can climb vines while the Minotaur has a charge ability that can attack enemies, activate treadmill puzzles, or just get places quicker. The combat is simple button mashing and the platforming elements are hardly Super Mario. However, if you look at it as an introduction for younger gamers starting their first videogaming adventure it isn’t that bad. Though childish, it is competently designed decent graphics wise. It certainly held my attention longer than the next game on our list.

I feel a little bad bashing this one, as this is also a relatively good-looking and semi competently designed game. Unfortunately, Alien Rage lacks the childish charm that Invizamal’s had to offer. It’s the far future and humanity has begun setting up mining operations on distance asteroids shown in a surprisingly engaging one-shot opening. Unfortunately aliens attacked the facility and everybody in it, so you play as generic space marine archetype Jack sent out to investigate. You are armed with a jump button that might as well not be there, a snarky AI companion, a pistol with infinite ammo, and the choice of whatever two weapons you can find in the levels. The aliens are heavily armored in a way to obscure anything that might actually make them look alien and not like Killzone rejects. Granted the armor has a nice enough futuristic space design but nothing that really screams alien.

The guns feel underpowered which I think the game realizes as it litters the levels with explosives barrels you can use to dispatch large swarms of enemies except when you really it. At the same time there is less cover than you would think for a protagonist that runs about as fast as a fridge on three wheels and has about as much personality to match. To the game’s credit, there is the promise of intrigue as you find ominous recordings from a long dead scientist woman who implies that there might be more to the alien’s agenda then there appears. Unfortunately, my constant death from underpowered weapons, over armored enemies, and minimal cover on a generic space mine setting quickly sapped any desire I might have had to continue. Really the most fun I got out of the game was pretending the AI companion was talking to me every time she said my name. When that is the most noteworthy aspect of your shooter, something has gone wrong.

I do not like timed missions. I can tolerate them when they’re infrequent in order to provide tension. But for the most part I get no enjoyment from something that limits how long I can play my game. So with that in mind, I had a surprising amount of fun with 10 Second Ninja. You play as a silent blue ninja whose animal friends are kidnapped and placed in robots by a pirate who is definitely not modeled after Dr. Robotnik. In order to save your animal friends you must complete a series of levels of escalating difficulty in 10 seconds or less.

Your skills are a double jump, and you are armed with a sword and a few ninja stars so use them well. The levels start out simple enough, just jump efficiently to kill all the robots. However, they soon escalate to essentially that but with instant death spikes, electrical barriers, and shielded enemies that require two hits. Fortunately you have infinite retries and can instantly restart a level when you know you don’t have enough time. You can also survey the level before making your first move to plan out your attack. What makes it tolerable is you can actually explore the Captain’s ship to unlock minigames, alternate costumes, and interact with the eccentric pirate crew. This leads to an oddly calming atmosphere in want will be some of the most frustrating, intense, and satisfying ten seconds of your gaming life. Timed missions still aren’t my thing, but I would make an exception for this one.

And the last game on our list is a stylish 2D beat em up with a seemingly complex item forging system. You play as two warriors cursed by an evil wizard to be hunted by death itself. The solution? Fight monsters to get ingredients to make the curse be gone. You have simple options with your attacks including a punch, upper punch and jump attack. But you can get random weapons and powerups but you can only hold one at a time. You can have a bird companion take an extra item for storage to bring back at a vital moment. Unfortunately any dropped item only exists for a few seconds before disappearing into the ether making strategizing with weapons and powerups difficult if not impossible.

It becomes very interesting when the timer runs out during a match as Death itself will appear and attack you forcing you to deal with the monsters and the physical personification of death. Unfortunately, I found the controls stiff and the sudden difficulty spike is absurd as you have very little actual combat options. The sticking point for me was when skeleton enemies sprouted from the ground across the entire field. Due to my limited jump, and the brief window of my jump attack no matter where I was I took damage no matter how often I played that section. Fortunately the appealing art style and soundtrack encourage me to keep trying. And I will admit I might not be very good at this genre of game. However, even with that in mind you get absolutely no instructions as to how to play the game so any hidden techniques that might enable me to play the game are forever lost to me along with any desire the replay it.

Playstation Plus Reviews for the Games of March